Last year, while I was resting a bit under the shade of a big tree in the Campo dei Gesuiti, I was struck by a small building that looked like an old church, but I couldn’t find any information on the site explaining what it was. Moved by the curiosity I decided to investigate and big was my surprise when I knew the history of this place.

The building is called “Oratorio dei Crociferi” and was for centuries an important charity center in the city of Venice. It was founded in the 12th century as part of the hospital runed by the Crociferi Fathers and used to provide accommodation and care for pilgrims on their way to the Holy Land. During the 14th century it was transformed into a home for poor women where they received care, accommodation while learning a manual work.

Like so many other places in Venice, the building was severely damaged by the flood of November 4, 1966, so the oratory was closed to the public for a long period to allow for the necessary restoration work and was reopened in 1984.

More information about the work of Palma il Giovene 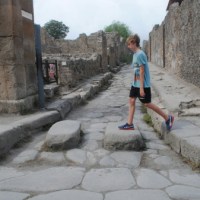