Arriving to “Piazza San Marco” from the Grand Canal, one of the first things I always stop to look at are the two large columns with the statues of the city patrons on top. These were brought to Venice from the East as war booty, and were erected in their present position when the square was enlarged and remodelled between 1172 and 1178.

One of the columns has the “winged lion” at the top, which is the symbol of San Marco. The lion is made of bronze, and its origin is very old, possibly Greek or Syrian. The wings are not original and were added to the lion’s body before the statue was placed on the column.

The other column belong to Saint Theodore, who was the first patron of the city before Saint Mark. He is depicted as a soldier on top of a dragon he has sorely killed. The body comes from a statue of the Roman period, the head, the halo, the arms, the spear and the legs were added later. The statue that is on the column is a copy, and the original is at the entrance of the ducal palace to prevent its deterioration.

This is one of the most symbolic places in the city, since in the past, public executions were carried out between the two columns, and that is why, even today, Venetians avoid passing between them, in order to avoid bad luck.

A third column, which was also supposed to be located somewhere in the square, fell into the waters of the grand canal during the landing manoeuvres and was. Despite several attempts, it has never been recover until today. 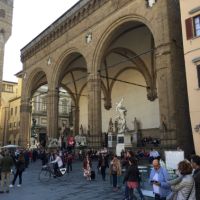